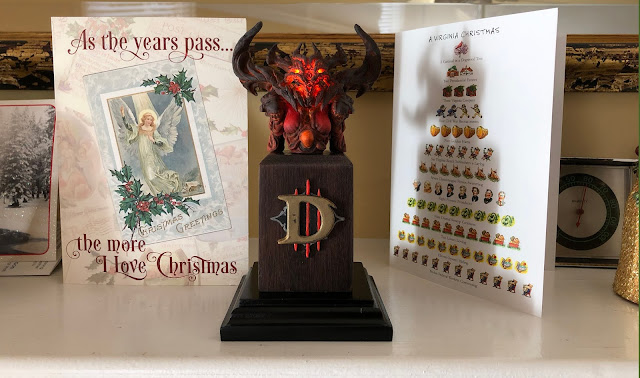 Diablo III on the Christmas mantle seems like an appropriate decoration for the year 2020. The glowing eyes are made with
an LED powered by a battery in the pedestal.

It have been a super busy time in the past two weeks. Since my last post a lot has happened. The big news is that I upgraded to a better 3D printer.  The Anycubic Photon that I bought a few months ago was just not worth investing any more of my time. While it could give decent results, I was getting about a 50 percent success rate. When prints take 6-16 hours, a failed print is a big set back and waste of time. So I ordered and received a Form 3 from Formlabs. It's more of a "professional" grade 3D printer that uses low force, laser stereo lithography. This should make more reliable and better finished prints. Plus, Formlabs was started by 3 MIT Media Lab guys - us Tech Nerds have to support each other.

I'll talk more about the Form 3 (F3 from now one) later when I have more experience with it, but so far I have had a 100% print success rate

Before I ordered the F3, I sent the locomotive frame stl file to Shapeways for a test print. I did that to evaluate the fit, strength, etc. That print cost about $50 and took about two weeks to get here. Note it was too big to print on the Anycubic Photon.

While I was waiting for the test print from Shapeways and the new F3 to arrive, I decided to work on a few small projects. If you watch Adam Savage's Youtube show called "Tested" you will be familiar with one-day builds. They are small projects that he can build in a day in his incredibly well equipped and stocked shop. He makes replica movie props, scale models, tools, clothing, costumes, and all kinds of things.

So I did some of my own one-day builds. I made some Christmas presents for relatives in my shop, Then, being inspired by Adam Savage, I  made a statute of the title character  from a computer game that my kids and I played, and I still play occasionally, called Diablo III.  Diablo is the evil enemy boss you are fighting in the game.

I printed the free version of Diablo III on the Anycubic Photon. The prints were not perfect, they had a flaw in the back, but I was still able to use the pieces with some sanding and putty. Since the Diablo character appears to be made from a glowing lava-like substance, I added an LED in the head to light it up (n.b. Diablo has no gender, it assumes the identity of the person it possesses. In Diablo III , that person was a woman. Hence Diablo III has some female features.) To further the effect of glowing lava, I used some florescent paint, which looks creepy in UV light. 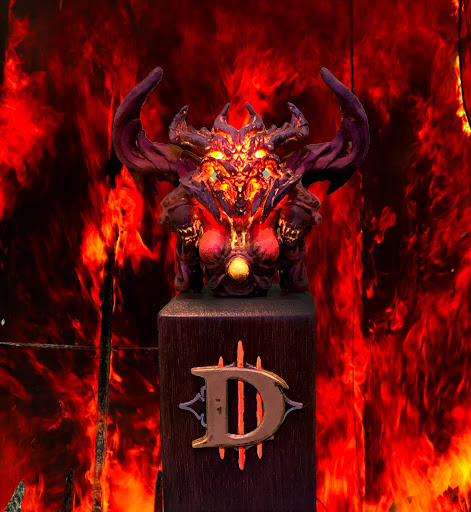 With the statute painted and illuminated, I decided to build a pedestal for it. So I went to Woodcraft and picked up a piece of ebony wood for the pedestal. I shaped the wood in my shop. Any excuse to use my wood working tools is OK with me.

So my one day build took two days. But it was a fun diversion. Then the test printed locomotive frame from Shapeways arrived and a day later so did the F3. So back to the locomotive.

The test-printed frame from Shapeways looked OK and was surprisingly strong, but it had a few glitches. So, one of  the first jobs for the F3 was to print a new frame with some modifications for the locomotive. I decided to try to print the cylinders and cross head guides as part of the frame. This will make installing the crossheads tricky, but it made the whole frame assembly quite strong.

The weakest point in the frame is behind the crosshead guide  bulkhead  where the frame splits into two rails going to the rear.  To stiffen this section, I added sections of 1/32nd inch piano wire to the frame. I secured those with 5 minute epoxy.

With the frame bolted to the smoke box and boiler, the whole assembly is very stiff.

Now to get this painted and add the running sub-chassis. The first sub-chassis I built will not fit in this design. This loco has a longer wheel base and uses smaller drivers.